Wellington, Fla. – June 11, 2021 – Horse-and-rider pairs returned to the International Ring at the Palm Beach International Equestrian Center on Friday evening for the second phase of observation ahead of the selection for the U.S. Dressage Team to compete in the Tokyo Olympics. After putting in their best efforts in Wednesday night’s Grand Prix test at the venue, the 14 shortlisted combinations were aiming to dazzle judges and team selectors alike by demonstrating their consistency and endurance in Friday’s Grand Prix Special. While some of the horses were initially starstruck by the different atmosphere of the Winter Equestrian Festival’s (WEF) expansive arena, others rose to the occasion. Adrienne Lyle and Salvino took home their second personal best score of the week, this time in the Grand Prix Special with a score of 82.413%. Steffen Peters moved up into second place with Suppenkasper on a score 79.532%, while Sabine Schut-Kery rounded out the top three with a 78.298% on Sanceo.

“It’s very exciting for US Dressage! We have three extremely strong horses who are capable of going over 80 percent and I don’t think we’ve ever had this depth before,” Debbie McDonald. “I think [hosting it under the lights at WEF] was the smartest thing we could have done. I don’t think any other country has been able to duplicate what we have and hopefully when we get there it pays off. Either way though it was good for the riders to feel what the horses are like in this type of environment. We had heat too so it was as close as we could get. The horses will have a bit of time to relax and go out in their pastures to be a horse and then we will start ramping up again and by the time we get to Tokyo – watch out!”

Differing from a selection trial, the top finishers of the observation event do not determine the final U.S. Olympic Dressage Team, but rather provide committee decision makers with a benchmark performance for each horse-and-rider combination. In addition to their performances during the observation event, a multitude of factors ultimately play a role in determining the athletes and horses that make it to the Tokyo Olympic Games, including each pair’s scores from 2020 and 2021, consistency in scores over the last two years and experience at an international level. At the conclusion of the observation event, the United States Equestrian Federation (USEF) team selectors will determine the three horse and rider partnerships that will represent the U.S. at the 2021 Olympic Games, as well as a fourth horse and rider as a reserve.

Though the U.S. Show Jumping Team elected to campaign their short list throughout Europe this summer, U.S. Dressage took a different route with this week’s observation event with the goal of replicating the heat and humidity of Tokyo. Wednesday’s event had close to 700 spectators and Friday evening had even more of a crowd so horse-and-rider combinations experienced the most electric atmosphere they’ve ridden in for at least the last year.

The shortlisted riders were challenged by the muggy Florida weather once again on Friday and the three groups of riders were split based on ranking with the order of go in each section drawn at random. At the conclusion of the night, it was Lyle and Salvino who once again earned the highest score after receiving scores of 80+% across the entire judging panel. Despite an error in the one tempis on centerline between the pirouettes, Salvino, a 14-year-old Hanoverian stallion owned by Besty Juliano LLC, earned eight scores of 10 from four of the judges for his final piaffe-passage tour  and final halt on centerline.

Peters moved up from Wednesday’s third place finish up to second place on Four Winds Farm and Akiko Yamazaki’s the 13-year-old KWPN gelding, Suppenkasper. Three of the judges rewarded him with scores over 80% and the extended canter and pirouettes were the highlight of the test with an abundance of 9s. Friday’s Grand Prix Special marked the first time US riders have had to submit background music and in true Peter’s fashion, he entertained the crowd with Coldplay’s Chris Martin.

Finishing in third place for the night was Sabine Schut-Kery, of Napa, California, on Sanceo. After Schut-Kery and the 15-year-old Hanoverian stallion finished second in Wednesday’s Grand Prix test with a score of 78.978%, the pair returned to the arena on Friday seeking another consistent performance. Riding a clean test, the pair was awarded a score of 78.298% for their Grand Prix Special performance.

On Salvino’s performance:
“I really wanted to put in another solid test with him. He feels really good and I have to say I had one of the best feelings in the warm-up with him. He got a bit fresh while walking over with all the clapping and he got wound up. But he was able to get it together and it was a good experience. The piaffe and passage felt super secure and really confident. We had an unfortunate mistake after the pirouette – he sat so hard in the left pirouette and when he jumped out into the ones he got his legs tangled up for a second. Things happen and we were able to get it together to get some ones, did the second pirouette and went back to business. The final centerline felt super and he came out feeling fresh and fit. That’s a huge test in this heat and humidity.”

On how to refocus:
“He’s amazing in that way. He’s a horse you’d want in the trenches with you. He totally gets it. And I feel like if I start to slip up he’s right there to catch me. It’s very special – there aren’t many of those that you get to sit on in a lifetime.”

On her prep leading up to the Tokyo Olympic Games:
“He’s going to have a little let down after this and we will keep working on fitness. He knows his job and it’s about keeping him fit, happy and fresh. We aren’t going to change anything because what we are doing is working. He seems excited and happy in his work – as long as he’s like that he’s there for me every time so we won’t deviate.”

On riding with music for the Grand Prix Special:
“Honestly I really like my music but I could only hear it in certain parts. It’s not a Freestyle and we are so focused we can tune it out. I’m curious to hear the audience reaction about it and if they like and feel more engaged with it, that is super.”

On his test:
“I’m feeling great with that clean test and we really went for the extensions, which paid off tonight. The passage was more collected than usual and I noticed it was a bit ahead of me, which showed me that I had him shorter and higher in the passage. It was a very honest test. The changes were clean and really good pirouettes. That’s what we wanted – a clean test with a reliable horse so we can go to Tokyo! What a fun night – I came around that last corner and imagined we were at the Olympic Games. Let’s go for the Olympic Games! That last minute of inspiration. Yesterday and today I kept visualizing this test stepping up from the Grand Prix. If the score would have been a 78 that would have been fantastic, and the score of 79 is icing on the cake. With the first three judges at 80, I thought we had it, but it was very close.”

On his strategy for the next two weeks:
“It works so well for him when we go for a walk several times a day and then every once in a while I’ll sprinkle in a bit of a piaffe then going back to pure relaxation again. He’s fit and can handle this temperature well. I always knew it could be a good horse for Tokyo because he has so much go. I didn’t have to push him tonight and what a lucky guy I am to ride a horse like him. [In the meantime], we will be staying here as all the team horses go together to quarantine in Germany. We have a couple weeks and Debbie can keep a close eye on us.”

On Sanceo:
“He felt super. It’s really exciting – it felt honest and rideable. When I went in the ring he had an extra little spark without getting ahead of me. He was very rideable and a fun ride.He has become so reliable and I can do every little detail with him.  I always aim for clean tests but we had a mistake in the twos.

On her two personal bests this week:
“It definitely gives me confidence even though we are always trying to make it better! It would mean the world to me [to be selected for the team]. It would be amazing.”

On Sanceo’s next steps:
“I always look at the end goal and then work backwards so he will definitely get some downtime. He still needs to move – he’s 15-years-old and I don’t believe in just throwing him out in the pasture. It’s top management and for him especially I do a lot of aquatread. He loves it.” 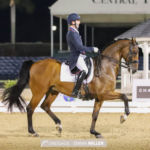 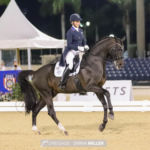